DHS’s Immigration and Customs Enforcement (ICE) Office of the CIO released an amendment to the TECS Investigative Case Management (ICM) on Jun 17. Interested bidders should take apply some analytics to developing their compliance matrix, as the Statement of Objectives – dated May 1, 2014 – has some interesting parameters.

Quantified Perception has examined the SOO language and developed word and phase counts. The most common substantive word in the 11,000 word SOO is “system,” with 275 occurrences. OK, no big deal, it’s a system acquisition, but the QPL Frequency Index of nearly 24 makes that a bit unusual.

The next most frequent word is “shall” with 172 occurrences, a frequency index of almost 15. That’s a lot of requirements! Indeed, the word “requirements” has an index of 4.7, with 54 occurrences.

Other high-use words of note include “”subject” (90 occurrences), “support” (40), and “solution” (31). There are some clues to the acquisition intentions in the word frequencies.

Quantified Perception’s phrase analysis supports the massive compliance challenge: “System shall” (62 occurrences) and “offeror shall” (42) mean the successful bid not only has to state compliance but also make sure it is easily verified by the evaluation team. Quantified Perception suggests adding a compliance table as a proposal appendix to make it easy for the evaluators to find each requirement.
Two high frequency terms for proposal emulation are “subject,” to indicate a case subject record (“subject record(s)” is used 50 times in the SOO) and “correlation ID”, used a dozen times. Successful offerors will ensure they validate their language with the SOO terminology. 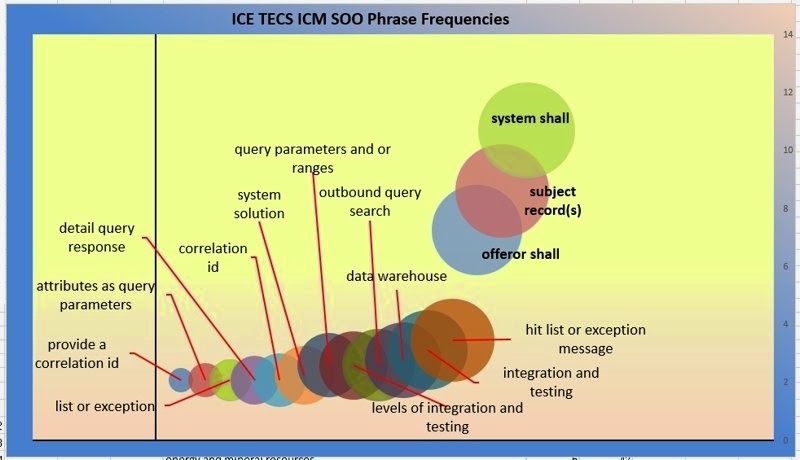 Posted by DonArnold at 11:03 AM No comments:

Why LPTA Makes Sense for government


You want to buy a widget. Or you want someone to run your widget farm.
You can’t just go pick a widget vendor, or a widget services provider. Rules require that you ask for anyone who is in the widget business to “Make me an offer.”
And so you get five, or ten, or fifty widget proposals. Each promises to give you the best widget, with the best possible widget results. How can you tell them apart?

The IT marketplace is large but finite. All vendors operate in the same technology space – same platforms, same software, same operating systems.  Most are within the same labor market, paying the same wages and salaries to attract and retain staff. So any IT solution pretty much looks the same. Procurement officials can eliminate offers that are obviously incompetent, but mostly the suppliers look pretty vanilla from the outside. Some bidders use proposal templates from third-party proposal support companies, so the proposals literally look identical. The main differences are in how good the proposal writing team is at their job…and they won’t be involved in actually delivering the services. Do you believe the proposal that uses the most superlatives?

Or is more effective to just pare down to those who appear competent and pick the lowest price? After all, saying you have the best management approach doesn’t make it so.
No one ever got in trouble for picking lowest price.

Posted by DonArnold at 10:15 AM No comments:

One simple response is “No.”

Amid the flower and prose of a twenty- or hundred-page proposal, reviewed by understaffed acquisition shops, it may be practically impossible to differentiate one proffered solution from the other five, ten, or fifty the contract specialist has to review. SO the favorite answer for the government appears to be “Eliminate as many as possible as unresponsive, and select the cheapest offer that seems to meet the minimum technical requirement.”

It’s all the same underlying technology, right? And EVERYONE promises they have the best of everything – best people, best management plan, best staffing, best quality control, best…everything.

As far as I know, no one ever got fired for buying the lowest cost offer.

Your opinion is welcome in response…
Posted by DonArnold at 6:19 PM No comments:


Another glimpse into the Interior Department Strategic Plan – the most common phrases expand the story. “Climate change” as the most common phrase attests that those who have to live with it are catching on to the importance of it. “Public lands” are of course what Interior is all about, but the other key concepts – young people, resources, jobs, heritage – add to a substantive focus for the Department. Thanks to Secretary Jewel and her staff for getting it right!

For reference, the Strategic Plan is 56 pages long with about 20,000 words, and “climate change” occurs 49 times in the document.
Comments and request for the full phrase frequency table should be directed to info@qpllc.com.
Posted by DonArnold at 3:15 PM No comments: