The transcript of the speech is assessed by the QPL CopyRater as “ESFP”, the type described by Myers-Briggs proponents as “Entertainer” or “Performer.” While a single speech cannot be interpreted as defining the speaker, other ESFP types include Bill Clinton and Ronald Reagan. Let’s say the speech was a noteworthy success in outreach communications. QPL describes text of this type as “Smooth, witty, charming” with “broad appeal.” The speech was properly aimed at middle America, not at politicians. Obama was on point, on target, and on message.

Examining the most common words in the transcript, we see the following:

Next, some political messaging: Iraq is the main focus for the speech, with ISIL referenced slightly less than Iraq. Syria is important to the discussion, but  “Syria” and variants are used 12 times – indicating a conscious assignment that Syria is not the largest issue in this speech.

“They” is used 11 times, including 5 times in the first 380 words, setting up “The Evil Them” as the faceless danger.

“But” is used 8 times, making the speech more assertive or aggressive than is strictly normal. “But” is used to reinforce a point subject to argument.

The other top twenty- words in the transcript confirm the martial theme of the text.

President Obama invoked the assumptive consensus with “we will” by far the most common phrase. The phrase is both inclusive and affirmative – “will” cannot be mistaken for “might” or “may.”

Unity is the message in “our country,” “our military,: and “our own.” We are in this together. 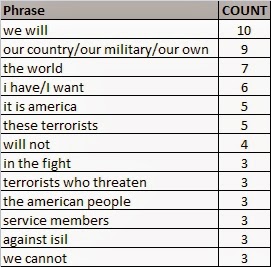 He invoked global support by referring to “the world” seven times.

“These terrorists” parallels the use of the word “they” to objectify without specificity, as in “’They’ are out to get us.”

Add a dash of patriotism, stir well, and generate support for the President’s plan.

Conclusion:
President Obama and his speechwriters crafted a well tuned, well targeted message that effectively reinforces his position and should inspire broad support, based upon the semantics and language alone. With an issue as complex and polarizing as going to war – even a limited one – make that necessary but not sufficient for closing the deal with the American people. Give Mr. Obama four stars for the speech language.

Posted by DonArnold at 11:52 PM No comments: